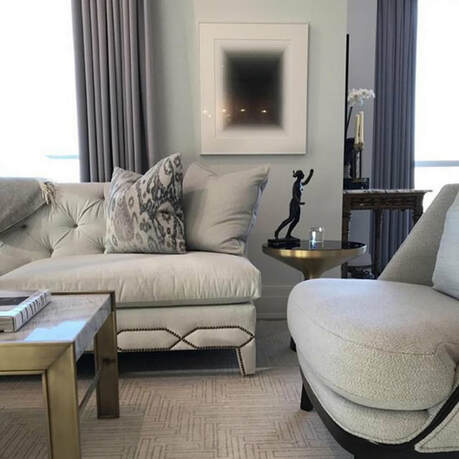 “There is no greater space to promote dreaming than the home, no better room to share in it with loved ones than the formal living room.” -Shaun Mandelbaum

But please, please, do not make the mistake of confusing the word ‘formal’ with ‘unusable.’ Far the opposite! In this case, the word formal only implies a deep, much needed human ritual, something devoid of the television, devoid of electronics, but rather where, within the deep recline of a down filled sofa, against soft and sensual materials, sound and light softened by drapery, the most intimate of conversations can carry on undisturbed.

In this thoughtfully designed space, each object in perfect consideration with the next, this formal living room creates a vivid fusion between the past and present, with traditional references and modern take.

A sofa that otherwise would seem too formal with its tufted back and French nails, is made more inviting through its loose oversized, and overstuffed, seat cushions. Such opposites continue to attract through drapery with its classical appeal made modern through the use of, not silk, instead wool; a tailored refinement outside of the billowy version more popular in decades past.

The silk, instead isolated to a single Ikat toss cushion in velvety view, is one whose blurring geometry references the modern art up above, squares shifting into squares. The sleek refined club chair, with its handsome stained smooth frame contrasts a pretty and nubby covering in boucle.

Like sun on a wintry day, hits of brass, the warmth to an otherwise cool palette, through line of the coffee table relating to the rug’s motif, and form of the side table to the antique console’s legs in behind, these objects relating to each other through material alone, and sooner back to the space than too quickly themselves, keeping the eye moving.

The marble top of the coffee table and that of the antique console in behind, relate the modern to history once again. Even just through surface, most effective. The rug’s reference to traditional wood herringbone floors reborn in an undeniably modern take is scaled down to read as texture instead of pattern, set tone on tone to give depth instead of contrast. The dark bronze sculpture’s movement reminds us of the graceful lines of the chair in front, yet on its own beautiful against the space’s stillness, geometry, and control.

A space to escape the realities of everyday. -The Formal Living Room 📸

There is no greater space to promote dreaming than the home, no better room to share in it with loved ones than the formal living room. -Shaun Mandelbaum

MANDELBAUM DESIGN is an interior design boutique with a highly energetic, talented, and skilled team committed to the satisfaction of their discerning clientele, with projects in the luxury residential sector. The firm offers a complete range of residential interior design services, space planning, project management, interior styling, as well as; most recently- a home staging service to realtors and sellers for the premium sale price of their home or investment properties.

The Crown of the Capitoline Museum

Ever since my first visit to Rome, on what I coined my Grand Tour, where I woke up at 6am each morning to take in the city’s places and things, to then go to sleep early and do the same thing again the next day, the Palazzo dei Conservatori has inspired me to no...

Peter Carl Faberge: The Man, The Myth, The Legend

So many things can inspire a young designer! Nature, fashion, architecture or interiors themselves, but for me, the greatest way is through the #books of old allowing access to the greatest minds and works of man.  One of these prized books, and...

Interior Design can truly have a social aim! In 1973, in an attempt to raise critical funds for Kips Bay Boys & Girls Club for much needed after school and enrichment programs in New York City, the concept for the @kbshowhouse was born. ​Since then,...

There is no greater space to promote dreaming than the home, no better room to share in it with loved ones than the formal living room.